Drinks for cold and flu season

Under the Weather? Try These Soothing Sippers Recipe Roundup:

During cold and flu season, we make sure the pantry is well stocked with honey, ginger, lemon, and a few other ingredients so we can easily stir up soothing beverages for ourselves and loved ones. Here are five of our go-to drinks for calming a sore throat to combating a full-blown, hacking cough.
No comments:

Just got back from a nice run at Clinton. It was really windy and a little chilly but felt nice. I ran to Lands End and decided to do the red loop along the shore. It's a very rocky trail. I can't see how people can do that on a mountain bike but I guess they are pretty crazy. After about 7-8 miles my left knee always start hurting. I sure hope that passes with time. I'd like to be able to do a marathon some day. I have been on the Glucosamine / Chondroitin for a couple weeks now. Hopefully that will help. I don't have any other joint pain while running and the little pain I have in my knee only comes after a few miles. I guess it could just be a matter of conditioning too. I really think I'll have to start some other kind of training if I intend to get serious about a marathon. Maybe some weight training of some kind.
No comments:

Email ThisBlogThis!Share to TwitterShare to FacebookShare to Pinterest
Labels: Running

Well, we can certainly make some of these...

Most Thanksgiving leftovers are perfectly good reheated. We don't need too many ways to eat leftover stuffing, for instance (although pan-frying it is pretty sublime). But mashed potatoes often aren't as good reheated as they were fresh. We've got a mound of them left over, too, and here's what we're going to do: Make crispy, creamy, cheesy mashed potato puffs. 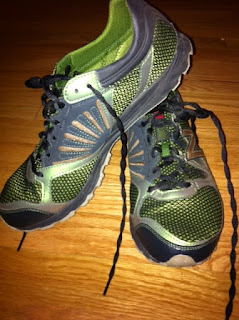 I just finished my second run in my new New Balance MT101s and I can't say enough good things about them. They are so light and comfortable. I used to really feel it in my feet after a longer run but the last two runs (8 and 5 miles) I must say my feet felt just great. I did just about 5 miles today on mainly gravel and concrete. I normally do trail runs when I'm not barefoot on the treadmill but I didn't feel like driving to a trail today. It was only about 55 degrees and windy. The temperature is supposed to drop 30 degrees in the next 12 hours so I'm glad I got in a run before the drop. I don't think I will make the Turkey Trot 5k tomorrow. It's forecast to be 25 degrees at 8am =/ Here is a link to my DailyMile page.

MT101 Review from Running and Rambling.
No comments:

Hot Toys for the Holidays

Hot Toys for the Holidays: "
Filed under: Holidays, Toys, Gear Guides: Babies, Gear Guides: Big Kids, Gear Guides: Tweens, Gear Guides: Teens
Sure, you can watch the toy commercials on TV and read the advertising inserts in your local newspaper. But if you really want to know what the hot toys are this holiday season, listen to the playtime experts at the Toy Industry Association.

Click on these links to find what's hot right now. Then, if you want to play even further, go to ToyAwards.org and register your vote for the 2011 inductees to the Toy Industry Hall of Fame. Winners will be announced in early 2011.

In the meantime, happy shopping and merry everything!

We (Tyler and the kids) had a chance to see Deathly Hallows part 1 early last night (no we didn't stay up until midnight). There was a Boy Scout leader who coordinated with a local theater to have a showing for scouts and families. The atmosphere in the theater was nice and we didn't have to fight a huge crowd.

I must say I was pleasantly surprised. There were some changes from the book (we didn't even see the invisibility cloak) but nothing too out of line (burning down the Weasley home). They didn't seem to keep themselves concealed or hidden in the movie as much as they were in the book. The book has them using poly-juice potion and the invisibility cloak when visiting Godric's Hollow but the movie just had them walking around in the open. Even at the wedding, when Harry was poly-juiced in the book, he was just Harry in the movie. Much of his time infiltrating the Ministry of Magic was spent under the cloak but in the movie he just walked around as Runcorn.

Over all there weren't too many side-tracks or changes from the book. I guess when you have two full movies (part one is over 2 hours long) to break apart one book you should be able to do it without butchering things too much.

It ended right about where I thought it would and it set us up for a spectacular part 2. I must say for someone who wasn't all that jazzed about the series when it first came out, it has certainly lived up to the hype. I can't wait to see Harry standing over you-know-who with both wands in his hands.
No comments:

You would like to think a company like Apple would learn from mistakes of the past. Apparently not.